Earlier this year, we launched a new site for the ACLU. The project required a migration from Drupal 6, building a library of interchangeable page components, complex responsive theming, and serious attention to accessibility, security and privacy. In this post, I’ll highlight some of the security and privacy-related features we implemented.

As an organization, the ACLU has a strong commitment to protecting individual privacy, and we needed to translate their passion to this issue to their own website. This meant meeting their high standards at a technical level.

Facebook “Like” buttons on the site offer a quick way for visitors to follow ACLU content on their Facebook feed. But even if you don’t click to “Like” a page, the tracking scripts behind them – coming straight from Facebook – log your behavior and make note of your visit there. That data can be used for targeted advertising, and the data itself is also a sellable product. Because these buttons are all over the web, Facebook can piece together quite a bit of your browsing history, without your knowledge.

To prevent this from happening to ACLU site visitors, we hooked up a jQuery plugin called Social Share Privacy to make sure that visitors who want to “Like” ACLU can do so while others can avoid Facebook’s data tracking. The plugin initially loads a disabled (greyed-out) button for the Facebook “Like”. If the visitor wants to use the button, they click once to enable it, which then loads Facebook’s iframe, and then a second time to “Like” the page.

A nice side effect is a faster page load for everyone since we don’t have to load content from Facebook on the initial page render.

YouTube and other video sharing sites present a similar privacy problem – the scripts used to embed videos can also dig into visitor data without their consent. 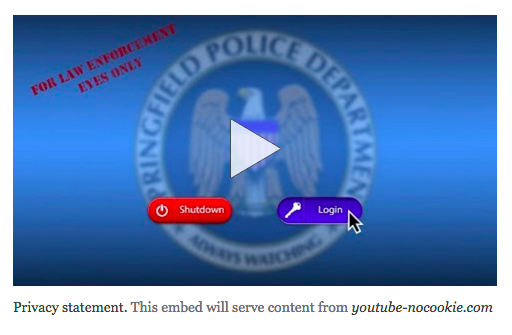 A MyTube video embed on ACLU.org.

MyTube is a script that was written by the Electronic Frontier Foundation as a Drupal 5 module, then updated as a Drupal 6 module by students in the Ohio State University Open Source Club. For the ACLU site, we worked on porting the module to Drupal 7 and updating various parts of the code to work with updated APIs (both on the Drupal end and the video host end).

Similar to the Social Share Privacy plugin, MyTube initially loads a static thumbnail image from the embedded video, and to play the video, the visitor gives it an extra click, opting-in to run code from the third-party site.

If you’re interested in helping complete Drupal 7 version of the module, take a look at some of the patches our team submitted, and test them out!

Due to the ACLU’s high profile and involvement with controversial topics, security was a major concern throughout the development process. While we can’t go into too much detail here (because, well, security), here are a few steps we took to keep the site safe.

When your organization champions a cause, all your activities should embody it, including your website. The ACLU takes these standards very seriously, and so do we. Take a look at some of our other projects to see how we worked with nonprofits on sites that reflect their values.

You should also check out