I recently moved from one apartment to another in NYC. It could have been stressful, but it wasn’t. I could’ve run into problems, but I didn’t.

Call me crazy, but I believe that the lessons I learn as an agile programmer helped make it smooth. These principles help me code, and they also helped me move.

Odds are that when you’re estimating a project, there are more tasks and subtasks than you initially imagine. That’s why we keep room in the timeline for follow-up work, overhead, and everything else unexpected. In the coding world, project timelines and tasks can sometimes be adjusted…but the timeline for moving cannot! (Unless you have a really nice landlord, but that’s not something I hear of often…)

By packing as much as possible at the outset, we left that space open later. That helped a lot, since things like dropping off items to consignment stores took more trips than we thought…but we had the time! Did we have a lot of extra time at the end of the process? Absolutely not! But did we have enough to do everything without ever getting swamped? Absolutely. 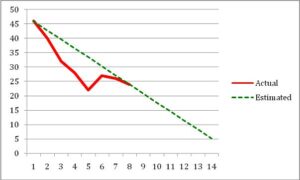 This was not on the wall, I swear.

I didn’t put a burndown chart on the wall or anything, but I sure did keep the pressure on to keep forging ahead each day. By spreading the work out consistently over a month, there weren’t many days where we had to do a whole lot.

What if the rental truck isn’t there? (This has happened to me before). What if some of our friends cancel at the last minute? Redundancy is essential to executing a plan successfully.

Have a good relationship with the project manager 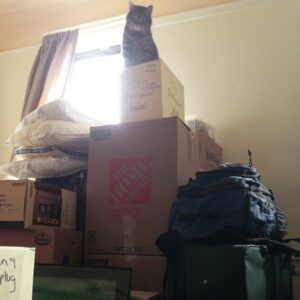 Pete ensuring the project is on track at a high-level.

Do work in small chunks

“What should we work on tonight?” How about the living room closet. Or, the kitchen cabinets. Tasks are often more frightening in the mind than in execution. So it’s also a trick to just get going. By the time the closet is finished, you already have enough momentum to do a little more afterwards.

For the first day, we taped up the boxes using a roll of packing tape and a pair of scissors. It took about a minute per box, plus a fair amount of frustration trying to find the end of the tape. It was time to stop working, and re-think how to work.

Although it took me fifteen minutes and eight bucks to buy a packing tape dispenser, it saved us a huge amount of time, and more importantly, removed the agonizing part of the process. We love this thing so much! 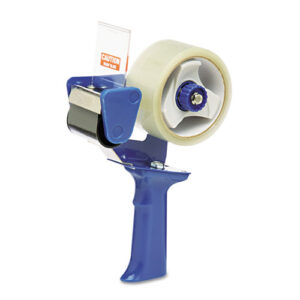 Complete tasks before taking on new ones

We fully packed rooms before moving on to new ones. It was satisfying to know that a room was totally done, and it gave us a quantifiable way to measure our progress. Likewise as a developer, I can focus better on my work if other tasks are entirely behind me.

Often times after a few days of consistent packing, we would simply not do anything moving-related for a night. We would make some popcorn, and sit back and watch a movie—or go out for dinner and drinks. It’s great to take work seriously, but that necessarily includes not being obsessive about it all the time.

Say no to stress

Keep in touch with external dependencies

You can control what you do, and it’s easy to do a project very well when it’s yours. But to finish the project, everyone’s contributions need to be completed in sync, and people involved who have less of a stake in it might leave the project on the back burner. So I called everyone involved as soon as possible and followed up shortly before the big day to verify that all the external pieces were in place.

“Thanks everyone! Great job!” Is that enough? No way! GIVE ME PIZZA. 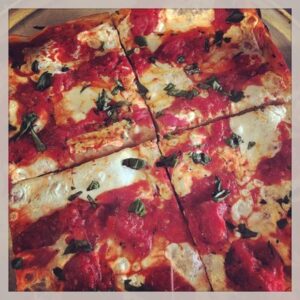 You should also check out