You may have read our previous articles about how to plan for Drupal 6 or Drupal 7 End-of-Life. The important thing to know is that the Drupal 8 End-of-Life is nothing like those. In fact, “End of Life” is completely the wrong idea. Instead, it’s more like one of those spa treatments where you get a full body scrub to get rid of the dead skin cells. You walk out feeling rejuvenated and refreshed.

Drupal 9 — Same as Drupal 8, But Without The Old Stuff 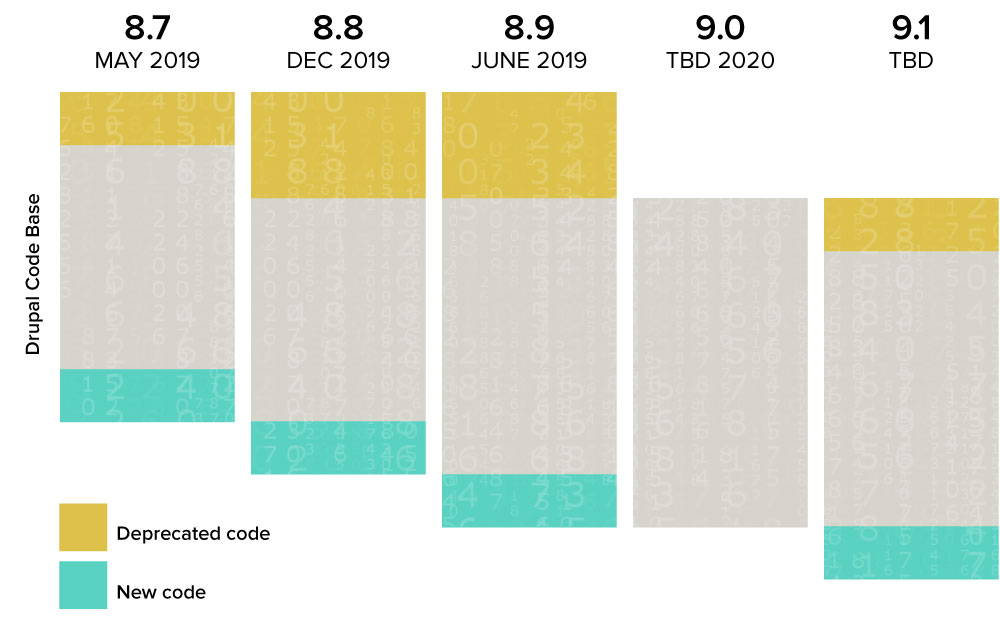 In each new minor version of Drupal 8 there are some new features, and some old code is marked as “deprecated” (that just means that it’s time to stop using this, because it’s going to go away some day). After nine minor versions over almost five years, there’s now an accumulation of deprecated code. This deprecated code is like those dead skin cells that you go to the spa to get rid of.  So Drupal 9.0 will be the same as Drupal 8.9, just without the deprecated code. The two might even be released at the same time.

Then, in Drupal 9.1, we see the cycle starting again: some new features, and some old code is marked as deprecated.

In the graphic above, you’ll notice that 8.9 does not have any more deprecated code than 8.8. That means that once a website is upgraded to 8.8, we can then start the process of ensuring that the site isn’t using any deprecated code.

If you are an Advomatic client, we’ll create a ticket in your queue to clean out all uses of deprecated code. In fact, if you’ve done a project with us recently, we’ve already started doing this as part of the Q/A process in our two-week sprints.

A Window of Almost Two Years for This Cleanup

This is the timeline for the next several versions of Drupal.  We’ve got about 2 years to make this change — more than enough time.

We handle all the technical stuff for you. But the purpose of the website is not for us to have a technical toy to play with, it’s to advance the mission of your non-profit. So we want to devote most of our time and effort towards your web strategy. While we could upgrade your website to the newest version every six months, it’s not the best use of your money or time. So we alternate versions. That means that your Drupal 8 website is either always on an even minor version, or an odd minor version.

We’ll likely continue that pattern as we cross the threshold into Drupal 9. That means that this process could be delayed by 6 months from what you see here.

Once we’ve cleaned up all the deprecated code, then we’re ready to upgrade the site to Drupal 9.  Remember: this is nothing like past major upgrades in Drupal. Instead it’s just like the minor upgrades from Drupal 8.6 → 8.7 → 8.8 etc.

The key takeaway is that this whole process should be almost seamless. We’ll create a few tickets in the queue to prep for the upgrade, and then for the upgrade itself.  But the majority of our time will still be spent on advancing your mission. Over the years to come the website content and its presentation will be able to continually evolve, all without a costly major upgrade.

Thanks to Amanda Luker for the charts!