Editor’s Note: This is the first in an ongoing series about what our team does in their spare time to help good causes.

On most Saturdays, when I’m not theming Drupal websites for Advomatic and our awesome clients, I make my way over to an old firehouse in South Minneapolis to spend some quality time geeking out, playing with discarded motherboards and hard drives. While this sort of geekery isn’t that unusual for me, for my company it’s a brand new experience.

I volunteer with an organization called Free Geek Twin Cities. We’re a nonprofit that valiantly tries to solve three global problems with one community recycling and education program. Our volunteers learn how to build working computers from donated parts, install an open source operating system, and eventually take one home with them for free.

First, there is the growing problem of e-waste disposal. In the United States, only an estimated 11-14% of electronic waste is sent to recyclers, and, of that, 70-80% is exported to developing countries where they are processed using harmful methods, such as riverside acid baths and open-air burning.

Free Geek Twin Cities accepts computer-related donations and either reuses the parts or ensures they go to a trustworthy recycler who has formally taken the Basel Action Network’s <a href="http://e-stewards.org/"Electronic Recyclers Pledge of True Stewardship. The Basel Action Network exists to ensure that toxic materials from electronics don’t cause long term harm to the environment and health – particularly in developing countries.

Secondly, we aim to bridge the well-documented “digital divide” by providing a way for anyone to earn a free computer — and with it an understanding of how it works, knowledge a person picking up a computer from Best Buy won’t get. The divide refers to the gap between those who are using computers and the internet and those who don’t. People who are uncomfortable with computers (or without access) miss out on educational, professional and civic opportunities for engagement.

Third, we don’t believe in propriety software: Free Geek thinks that free and open source software not only means not having to bother with copyright and licensing restrictions, but means better software, through a model of decentralized contribution from those interested in making the product better. We use the Ubuntu distribution of Linux, and showcase programs like Open Office, Firefox, Thunderbird, VLC, Gimp, and Inkscape to show our new users that they can do anything you can do in Windows on Ubuntu, without the cost of a license and the constant worry of viruses!

Sounds like a cool project, right? Yes! But we can’t take the credit for it. Free Geek was founded in February 2000 by a group of geeks in Portland. It steadily grew, and now the organization takes up a city block and has a paid staff collective (even with health care!) Their model of selling extra computers and parts in a store pays most of the organization’s costs, making it incredibly self-sustaining in an age of shrinking foundation grants.

In the recent years, Free Geeks have sprung up around the country (and Canada!), including in Chicago, Vancouver, Toronto, Arkansas, and Columbus. Each one is unique, but we all benefit from the groundwork that the “mothership” has laid for us, and from the work of the other Free Geek satellites.

A small group of us started talking about starting a Free Geek in Minneapolis in the fall of 2007. We finally made the leap to renting a space in the fall of 2009, after doing some planning and fundraising. We started by just accepting hardware donations until we had a critical mass of good parts to work with. In the spring of 2010 we began training volunteers (and ourselves) on how to take apart and build computers. We’ve given away computers to volunteers and also to nonprofit organizations to use or give away to their clients. This is surely the most gratifying part of the whole project! 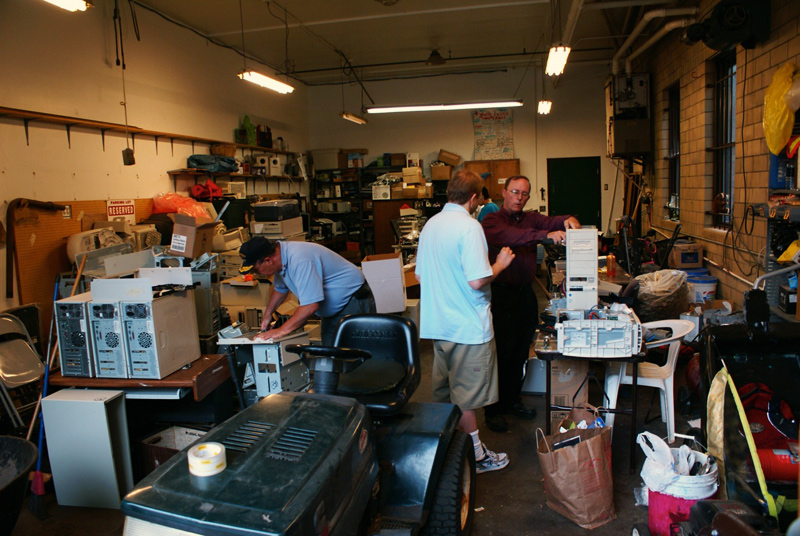 Steve shows Dave how to strip a computer for recycling

In the coming years, Free Geek Twin Cities aims to be the first place people in the Twin Cities take their old computers. Eventually we’d love to have both a warehouse for managing all the material and a storefront for selling computers and computer parts. But, for now, we will concentrate on one person at a time.