Last November, after most of the last century in the minority, the New York State Senate Democrats finally won control of the State’s upper chamber.

With the majority came budget control and the power to make Senate-wide infrastructure choices – including internet decisions. This is how Advomatic helped change Albany.

How we got from early January meetings of a few technology strategists to this BETA launch is a great story that Aaron Winborn will better describe from a technical standpoint, but which I’ll describe from my political point-of-view.

First, the context as reported by the local paper:

Democrats took control of the State Senate last month after more than four decades of Republican rule, then set out to determine how the Senate’s own budget of nearly $100 million and its attendant perks were being distributed.

They are still trying to figure it out.

They recently realized there are some 75 employees working at the Senate’s own printing plant, a plain brick building on the outskirts of Albany. On Long Island, they found a small television studio, which had been set up – all with public money, with two press aides on hand to help operate it – for the exclusive use of Republican senators to record cable TV shows.

Democrats also came across what they are calling the “Brunomobile,” a $50,000 specially outfitted GMC van, with six leather captain’s chairs (some swiveling), a navigation system, rearview camera and meeting table. Joseph L. Bruno, the former Senate majority leader who was recently indicted on corruption charges, traveled in the van after his use of state helicopters sparked a feud with the Spitzer administration.

Then there are the parking spots, always at a premium near the Capitol. Democrats had been given roughly one spot per senator – there were 30 Democrats last year – and guessed there were perhaps double or even triple that controlled by the majority. Instead, they have learned, there are more than 800.

And Democratic leaders must determine what to do about 45 workers toiling away in a building close to the Capitol who appear to have been engaged in quasi-political research for the Republicans.

For decades the GOP wasted taxpayer money on secret projects, blatant graft, and partisan incumbent protection efforts. This led to Albany’s infamous worst-in-nation dysfunction. Frustration with conservative GOP incompetence brought us a new generation of reform-minded Democrats and a citizenry primed for change. Add a major wave election and a Federal investigation to this mix and the result was no surprise: prison for the GOP leader and his Republican party’s demise.

The old web system that the Republicans built was like the other instances mentioned by The New York Times. It was designed to make the Republicans look great. No frills for the Democrats. The Democrats shared one site template and single domain. Each member of the GOP had their own website and vanity URL which included additional features not available to the minority Democrats.

These sites themselves were clearly oriented from the GOP Senators’ perspective – they were focused on displaying the ribbon-cutting photos, greetings to special interest groups, etc — the hero worship aspect of perpetual campaigning that sometimes passes for politics. The sites were broadcast only and included very little space for meaningful feedback or accountability.

Democrats took control promising change, transparency, effectiveness, and responsiveness. Not long after they won, a team of local technologists was assembled to explore how those principles could take root online.

Our friends Andrew Rasiej and Micah Sifry connected Advomatic with the Senate for a few key reasons: we had experience working in government, we understood state politics, our fast in-house design team was prepared to double up on revisions, we boasted a managed hosting infrastructure crew, they respected our commitment to building with free Open Source technology, and because our unparalleled team of developers could build a humongous custom Drupal site faster than any shop around.

Open Source made perfect sense: no pointless monthly license fees was some long overdue fiscal responsibility. We helped the skeleton Senate tech staff build an in-house webteam so as to save even more taxpayer money from consulting fees. Drupal made sense for this purpose as well, because the breadth, depth, and collaboration of the Drupal developer community is so great. Also, Drupal’s prominence as the CMS of choice among many liberal organizations meant that there would be a large number of prospective site administrators familiar with Drupal.

As Rasiej told The Observer, “Malcolm Smith and his staff’s commitment to reorganizing Albany on a 21st-century platform, with a commitment to transparency for constituents, is the most significant political event in the past 30 years and has the potential to be not thought of as evolutionary but revolutionary.”

What We Helped Do

With Senator Smith’s blessing, that small crew of technology folks set out to build nothing less than the gold standard of State Legislature websystems. Advomatic’s task was to design and begin the Drupal structure that Senate staff would finish in-house, as well as help think up the items that would constitute the best of eGov for a legislative body. Some of the features on this wishlist:

As CIO Andrew Hoppin told the Observer, “These new technologies will help Senators be able to post ideas and issues that they want more minds on. That shouldn’t be hard, that shouldn’t be a huge process or a discreet process, once you create it right the first time.”

Anyone who knows civics knows that the work of a legislative body is not documenting ribbon-cuttings and parade walks. The work happens in committee. The committees and sub-committees do the heavy lifting of soliciting feedback on initiatives and crafting legislation.

If you think like us that government websites should facilitate citizen participation in and awareness of this, the work of government, then you’ll appreciate the new focus on the many committee pages. The committee pages are actually more like fully functioning internal sites with all the feedback and collaboration systems found elsewhere in the website. The new committee pages work — they’re not static. 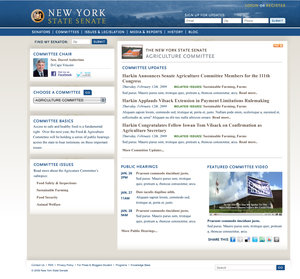 It’s comically obvious that the old system wasn’t built for online governance. However, it was successful for a long time in its intended purpose: incumbent protection.

As a New Yorker, I’m thankful that the new systems we helped build are all about opening our government’s functions up to the people. To be truly inclusive, the majority and the minority were built equal. All Senators and users are empowered. We built in levers for transparency and accountability with well established online feedback systems.

This site was built for citizen empowerment with collaborative online tools. Unlike ex-President Bush, the New York Senate webteam and Advomatic believe that self-governance is a responsibility that should be present in citizens everyday lives rather than in a single “accountability moment” once every 4 years.

It follows then that making governance collective is one of the jobs of government. Actively reaching out to where New Yorkers live online and getting them to contribute to their communities can happen through this website. Opening up channels of feedback on government initiatives through this website will counteract the corrupt and outdated Albany of the GOP-era, as well as empower citizenship for years to come.

We are our government and I am so thrilled that my fellow New Yorkers can use this website to make our communities better. I am proud to have been a small part of it.

Let us never forget that government is ourselves and not an alien power over us. The ultimate rulers of our democracy are not a President and senators and congressmen and government officials, but the voters of this country. Your Government is still on the same side of the street with the Good Samaritan and not with those who pass by on the other side.

Thanks and Congratulations to our old friends who are now on staff at NYSenate and who completed this project brilliantly:
from former client Jewcy, Craig Leinoff; from past community-building projects, Phillip Anderson; from joint tech-culture projects Noel Hidalgo; from project CivicSpace, Andrew Hoppin; from a shared pro-bono passion Nathan Freitas. A hat tip to EchoDitto who was responsible for the early project management and first draft of wireframes/specifications, and great thanks to Personal Democracy Forum’s Andrew Rasiej and Micah Sifry. Lastly, to all the new friends we made on this project, congratulations and job well done!