We have been pleased to provide Continuous Care for Rutgers-Newark since the 2011 redesign. You can read more about that here. We have a long-lasting relationship with the campus and have been providing ongoing support for Rutgers-Newark for tasks ranging from bug-fixes to regular security updates on their Drupal site. We’ve also done a few separate rounds of major improvements: converting the site from a static/fixed width site to a responsive one and making the site more accessible for all users. 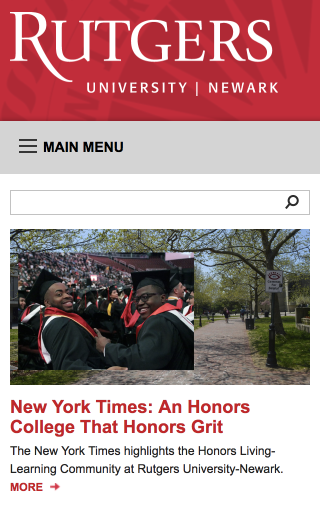 In 2013, we set out to take their static design apart and make it flexible for a world that was beginning to demand “responsive design”. Rutgers-Newark needed a site that would be responsive on a host of possible screen sizes. Our efforts included:

As compliance with web accessibility guidelines became increasingly necessary, improvements became a focus for Rutgers-Newark in that area and we were there to guide them through their options. Previously, a third party had done a full accessibility audit report. We organized the resulting tasks into an order that allowed us to efficiently perform the upgrades. Then we implemented those improvements to bring the site in line with university accessibility policies and WCAG level AA compliance.

See more work Contact us
We use cookies to ensure that we give you the best experience on our website. If you continue to use this site we will assume that you are happy with it.OkPrivacy policy